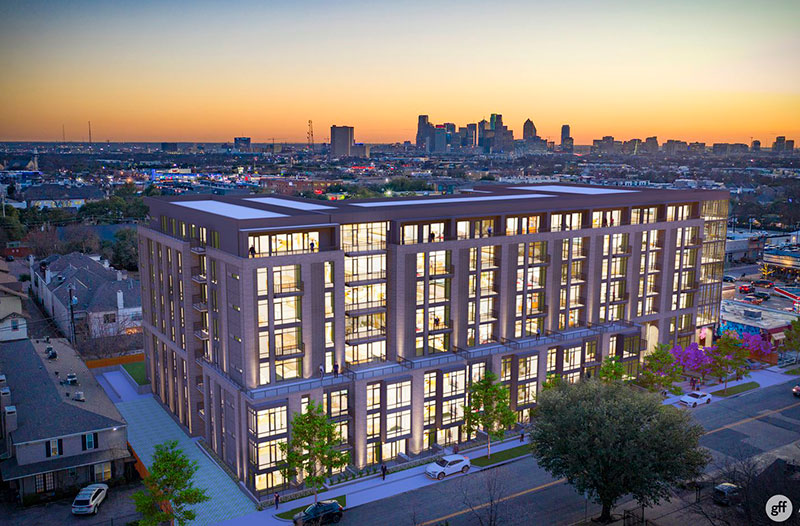 DALLAS (Feb. 18, 2020) – RangeWater Real Estate announced today that it will transform a 1.25-acre vacant lot into an iconic multifamily community that anchors the north end of Lowest Greenville’s commercial corridor. Situated near the intersection of Greenville and Richmond Avenue, the development will lend further vibrancy to the neighborhood by providing its residents with walkable access to some of East Dallas’ most popular restaurants and entertainment venues. First resident move-ins are planned for Spring 2022.

“Lowest Greenville has experienced great change over the last decade,” said Nick Wilhelmson, RangeWater’s Managing Director of Texas. “It’s now one of Dallas’ hottest places to live and visit. Our Greenville & Richmond project is well positioned to enhance the neighborhood with its timeless architecture, luxury units and new residents who will enjoy walkable city living.”

For groceries and other necessities, Trader Joe’s and Sam’s Club Now are just a block away from Greenville & Richmond. Foodie hot spots, HG Sply Co., Truck Yard, Gung Ho and The Merchant are a five-minute walk. RangeWater’s new project is just three miles from The Epic, an mixed use development under-construction in Deep Ellum, where Uber will bring 3,000 office workers in late 2022.

“This community will appeal to renters by choice who prefer the turnkey lifestyle of apartment living with connectivity to the great restaurants and retail along Greenville Avenue as well as the nearby business districts,” said Steven Shores, CEO & President of RangeWater. “Our investments in East Dallas will create experiences and housing options that benefit the entire area.”

The first three stories of the predominantly brick building feature apartment units reminiscent of walkup brownstones that are more commonly found in Chicago and New York City, with a generous setback for the floors above the first three-levels facing Richmond, honoring the lower scale of surrounding existing buildings.

Wide sidewalks, street trees and a pedestrian plaza at the leasing office entry complement the architectural richness of the building while also enhancing the pedestrian streetscape along Richmond Avenue. The project features a sky terrace amenity area at the southwest corner of the building with unobstructed views of Downtown Dallas and a sunken private pool terrace that will offer a quiet respite from the hustle and bustle of the vibrant Lowest Greenville urban neighborhood.

RangeWater, formerly known as Pollack Shores, is known for building quality multifamily communities across the Sun Belt. Until now, RangeWater has been under an NDA and the team looks forward to sharing its plans with neighbors at a future Neighborhood Association meeting. Local architecture firm GFF and contractor Oden Hughes are leading the project’s design and construction.

RangeWater is a fully integrated multifamily real estate company creating fulfilling experiences for its partners, clients, residents and employees across the Sun Belt. The Atlanta-based company has acquired and developed more than 26,000 multifamily units since its inception in 2006 representing in excess of $4.4 billion in total capitalization. RangeWater currently manages a balanced portfolio of over 38,000 multifamily units across ten states. With offices in Atlanta, Dallas, Denver and Tampa, RangeWater targets high job growth markets with demand for new housing.